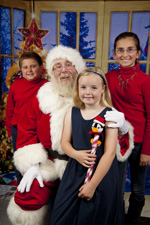 Santa John is a real beard Santa and has professionally tailored Santa suits made by the famed designer Adele's Of Hollywood. While attending class at IUSC Santa John participated in the filming of an episode of The Discovery Channel's "How Stuff Works", which aired in December of 2010. Santa John was also featured in an Article in the Observer Dispatch December 25th 2012 "Playing Santa a way of life for Whitesboro resident". Santa was featured in ACCENT magazine December 2019. Santa has also done advertising print media and a TV special!

Santa John wishes to bring joy and happiness to all, and is available for children's parties, business events, family portraits, charity and non-profit group events, and many other activities. Santa John has activities and prices to accommodate any budget. If you do not see what you are looking for just ask Santa!

You can contact Santa by clicking here or email Santa at snowbeltsanta@gmail.com. One of Santa's helpers will contact you to arrange your event and discuss the many options Santa John can offer.

Also please check out the calendar on the site to see what dates and times Santa has available.